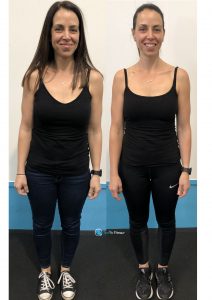 Teresa joined Terrific Fitness (TF) in April 2018.  Teresa is a busy family mother of three children all under 12 years of age.  Ever since her early 20s, Teresa has been conscious of her health after the torment of her teenage years of being overweight and being picked on by her peers.  Although being able to stay in shape, Teresa found it difficult to find the right environment to train.  Most of time she spent behind closed doors, struggling to find a group or a venue to have the self-confidence around other people, with whom she felt as though she fit in, doing things right, and interacting with others.

Teresa struggled with stress and anxiety. She searched for personal training and group training where the environment was friendly and approachable.  She had tried other gyms and felt as though she was just a number or ‘a walk in’ that just did their own thing.  Her searching led to TF and about 3 phone calls with Terri the owner of TF.  Teresa’s ‘Just Do It’ voice got things started and she found herself in a group of people and trainers that made her feel welcomed; and so began Teresa’s progression which has led to many returns and benefits of a series of programs that have yielded the following:

Teresa has thrived in the interactive environment of members and trainers at TF.  The group training has brought out another level in Teresa’s training that has allowed her to achieve her goals.  Teresa loves the interaction the trainers have with her and all the other members in exercise correction and motivation that makes it personal for all the participants.  The attention provided by the trainers has made Teresa feel looked after and that the trainers have her back in doing things the right way and with progression. 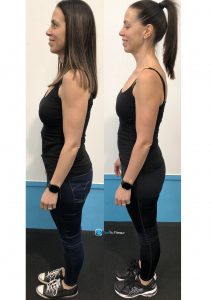 Over the past 2 years with TF, Teresa’s exercise schedule and participation has been an ease on her stress and anxiety.  The group exercise and been a therapy of release for her that has enabled Teresa to better manage her stresses.  For Teresa and many others, Covid19 has been challening with adapting to new practices, adjustments to different measures.  Teresa has maintained the training frequency through participation on live zoom sessions (10 a week to choose from) and dropping into which ever session she chooses.  Teresa has been a regular participant.  Although app based training programs are also available, Teresa prefers the live sessions so that she can see the other members, interact with feedback or say hi to those present. Mostly because the interaction with the trainers, the corrections, and the modifications the trainers provide so as to offer alternatives or progression to exercises.  The personal touch by the trainers is an element Teresa enjoys greatly with the TF community.

The engagement and feedback of knowledge from members and trainers have developed Teresa’s ability to use exercises to varying degrees to suit her progression.  From doing simple step through burpees to doing full burpees.  Correction and execution of lunges and squats from the coaching tips of the trainers.  The service has expanded for Teresa to aid her in understanding her lifestyle of eating habits, what foods have different reactions to her body, and experience of how to implement her own strategies of eating plans.  Teresa participated in Nutrition Coaching with Head Coach Terri, during which she learned so much about food for her body and lifestyle.

Come the 22nd June when the Covid19 restrictions are eased and the studio is open again, Teresa is really looking forward to the return.  For her, it’s more than just the training.  The TF community support, coaches, friendly environment, and friendships with all other members, bring a great sense of belonging. 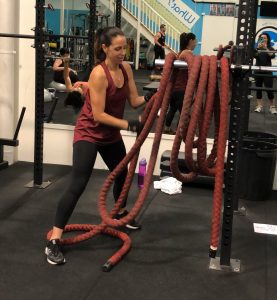 “I had been searching for a gym to take up training after doing my own thing at home and trying other gyms in the area.  I found it difficult to find the right place where I could feel comfortable with people or where trainers made me feel valued.  I found Terrific Fitness and after a couple of phone calls with Terri, I signed up and have been there ever since.  My experience of exercise and health overall has really grown since I’ve been there from the coaches and the interaction of the other members.  I’m training better and it’s shown in feeling stronger and shaping a bit too.  Coaches have shown me a lot with how to move better and progress.

I’ve tried other gyms before and it felt like being just a number.  The trainers didn’t take the time to know the members or help enough to modify exercise or correction.  At TF I’ve found the trainers to be very interactive, offer alternative exercises if my movement was restricted (low back problems) and because they know my strengths the TF trainers progress me and step it up which gives me a motivation boost.  That personal direction has improved my strength since I’ve been there.  That attention has been there since day one.

The support from members and coaches is the difference at TF.  That personal attention in the exercises, motivation and cues that the trainers give me (and all the other members in the session) is gratifying, that we are being looked after and not treated like a number.  Terri the head coach, takes the time to pay attention to all the members and goes to great lengths to give me and all, that bit extra because she is passionate about what she loves doing.” – Teresa Iaconis

Of all the companies out there, I chose to train with TF because the trainer was real, she tells you how it is and has her own life experiences to build from. I find it’s more rewarding to learn from someone who has had life experiences and not just someone out of school with a PT degree and no story to relate too. END_OF_DOCUMENT_TOKEN_TO_BE_REPLACED

Thank God I did as it’s one of the best things I did for myself and my family, I’ve never looked back. I have now been training with END_OF_DOCUMENT_TOKEN_TO_BE_REPLACED

Being unable to go back to my beloved sport that I lived for I had to look at different options. I looked online for PT’s close to END_OF_DOCUMENT_TOKEN_TO_BE_REPLACED