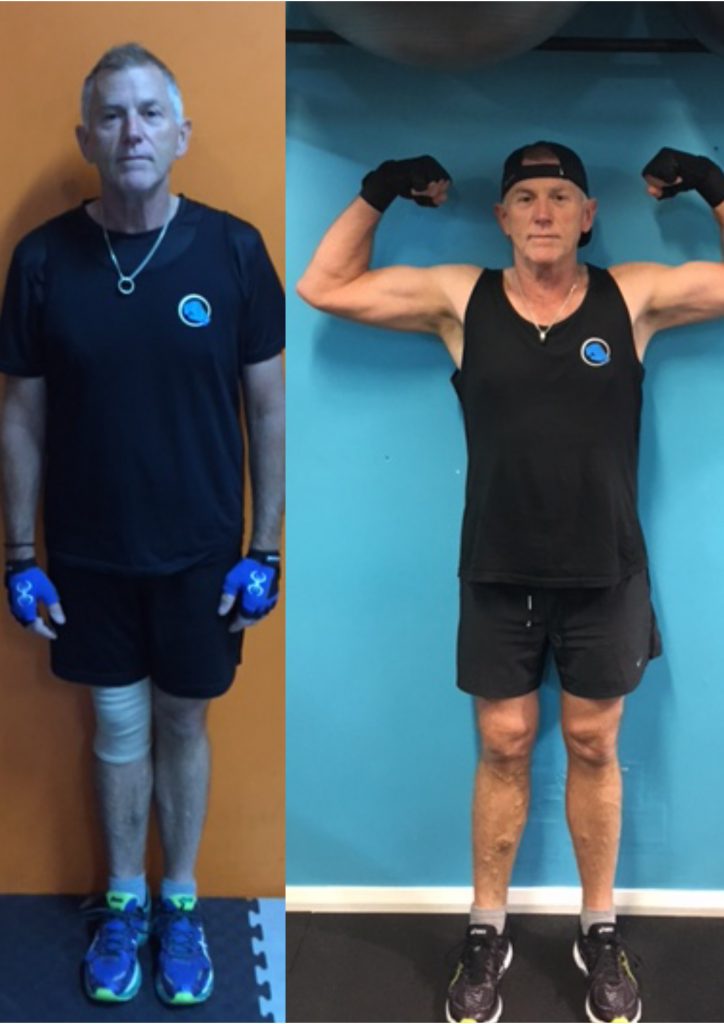 Craig is one of Terrific Fitness (TF) long time members.  At almost 60 years of age, Craig has been with TF since 2014 and along with being part of the TF community, many changes have taken place.  The group training and the motivation to participate with other members and to interact and share experiences is part of Craig’s transformation.  But it goes back further.

When Craig was in his late 30s he was over weight and unfit. A 100kg in fact. And as he puts it, a light bulb moment that struck him as he was preparing to celebrate a family event.  Craig had trouble finding a pair of pants that would fit him and the ones that did fit, were uncomfortable.  From that moment Craig decided to change things for himself.  He gave up alcohol, changed his eating habits and began exercising.  In two years Craig had lost 30kg and along with the weight loss, he gained confidence back and was feeling good about exercise and was a frequent runner, until Plantar Fasciitis set in, putting an end to running.  It got so bad Craig had to walk around with crutches in the morning until the feet settled enough for him to be able to hobble around without them. It was at this point that Craig found Terrific Fitness.

In 2014, Terri Batsakis was running group fitness out of school halls.  Craig got word through a close friend about Terrific Fitness and signed up.  What began as a decision to help himself, lead to joining a community of like minded people with common goals, and through the guidance of the TF staff and community, perpetuated a desire to gain knowledge, apply himself to a higher degree and set the bar higher.

Craig appreciates his age restricts his ability, and the wear and tear of the joints, particularly his knees, (and recently his shoulder) will call upon him to slow down. Craig sets the bar above all the rest for his age despite the worn joints. The coaches at TF have assisted Craig in overcoming the Plantar Fasciitis and have helped increase his range of motion and stability in all of his worn joints, giving him more freedom to move, and delaying the desperate need for knee surgery.

The applied knowledge of food and nutrition has grown, particularly through the guidance of Terri and the coaches, bringing with it an incredible physical, mental and emotional transformation. However through all of this, for Craig the most important part of this journey has been becoming part of the community, the support and the security of belonging. 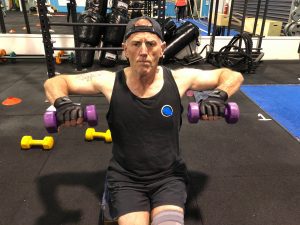 After joining TF in 2014 Craig found a new avenue of exercise, and quickly saw how he could expand his knowledge of living a better lifestyle.

At TF Craig worked closely with coaches in Personal Training as well as group fitness to improved his mobility, and correct some of his structural imbalances. This enabled him to improve his range of exercise options and improve his all-round movement, which in turn, improved his life style.

Through PT and workshops, Craig also developed his knowledge of nutrition and mindset enabled him to take his transformation to the next level. He found of group of people that he really enjoys being with, making the lifestyle changes even more successful.

Working as a bus driver, he looks forward training, achieving goals and bettering his mark each time he attends.  Constantly trying to beat his burpee challenge, and pushing weights to heavier limits.  Going backwards or lessening weight challenges is never on his mind.  Craig keeps moving forward.

This is not to say that Craig hasn’t had to adjust a few things in the process, with his worn joints, a few injuries.  But this hasn’t stopped him.  Through the guidance of Terri and the coaching staff, we have set Craig new challenges that he has excelled at and made his own. Congratulations Craig! A true inspiration to everyone who meets you! You rock!

Here are a few words from Craig himself: 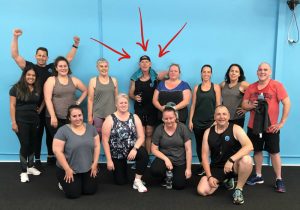 “I learnt about Terrific Fitness through close friends that were attending the classes.  They mentioned how great the classes and supportive community were, so it prompted me to give it a try.  It’s been great ever since.  Terrific Fitness broaden my options and methods of training.  I used to be a runner, but now with the variety of group classes and the coaches, I really enjoy participating on a level I can match each time I come.  Before I joined the TF group I would say my knowledge on exercise would have been about a 6.5 out of 10.  Now it’s a 9 out of 10 because of the experiences here and the guidance the coaches have shared with me.

The group participation is what I really come for.  From exercising myself and being a runner to being part of a group in a great environment.  On the occasional day I might feel low in motivation and as though exercise is a chore, but it’s when I get there and start pushing the numbers and reps with the rest of the group, is when I’m grateful I turned up and got started and I leave feeling satisfied.  During Covid19 it’s been difficult again because I miss the studio gym.  Getting into the online training is keeping me in the frame of mind and the constant interaction amongst the group keeps me on track because the group is so responsive and supportive.

The biggest lesson has been gaining knowledge in how to eat well. The 80/20 rule of exercise and eating and nutrition.  I still struggle with preparing meals and food, but my choices are better and I’m more confident with my food because of what I’ve picked up in knowledge from TF.  Terri has been an inspiration in teaching me so many aspects of food.  Terri’s example of her knowledge, application, business management, family values and attention has been amazing to watch and inspires me to follow the same examples.  I’m waiting for this Covid19 to lift so I and all of us can get back to the studio and train as a group face to face.  There are no egos here, it’s an accepting environment that’s great to belong to.”

Of all the companies out there, I chose to train with TF because the trainer was real, she tells you how it is and has her own life experiences to build from. I find it’s more rewarding to learn from someone who has had life experiences and not just someone out of school with a PT degree and no story to relate too. END_OF_DOCUMENT_TOKEN_TO_BE_REPLACED

Thank God I did as it’s one of the best things I did for myself and my family, I’ve never looked back. I have now been training with END_OF_DOCUMENT_TOKEN_TO_BE_REPLACED

Being unable to go back to my beloved sport that I lived for I had to look at different options. I looked online for PT’s close to END_OF_DOCUMENT_TOKEN_TO_BE_REPLACED