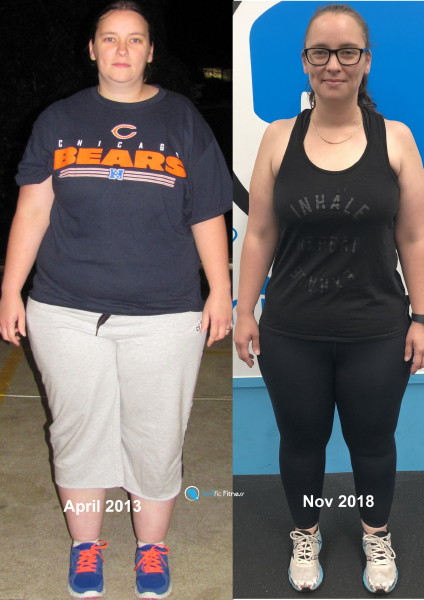 This month’s Profile of the Month is beautiful Danni Toull.

Danni has been a member of TF on and off since 2013. Her most recent return was in August 2018 after having her little boy. Danni is an incredible woman who is so determined to be the best role model ever for her kids.

Danni always puts 110% into her training never letting a session go to waste. Since returning in August Danni has lost a further 24cm from around her body with 7cm being from her waist alone. This lady is on a mission!

Danni is only the 2nd person in the history of TF to win Profile of the Month for a 2nd time. The reason I have selected her is because regardless of what has gone on in her life, Danni has fought to keep moving forward in her journey, even after losing her friend to cancer and having her 2nd child back in January. Once she knew the formula for success she has continued to implement, strive and conquer.

Danni has now joined the staffing team of TF as our Admin and Customer Service Consultant and plans on taking her journey to the next level. You really need to watch this space. This little lady is going places! So friggen proud of her!!!!

Here is Danni’s journey from her perspective:

“Before my journey began at TF in 2013, I hadn’t really been physically active since my teenage years and had battled anxiety and depression for several years. I hated the way I looked, felt, presented myself and to be quite honest just hated myself. I had a friend who saw me struggle every single day and suggested I trialled a place where she was training. At first I was extremely hesitant for many reasons. Being 127kgs at the time, the mere thought of exercise scared me! But, I wanted to make the change and start enjoying my life.

I started with just two sessions a week, Tummy, hips and thighs and fitness circuit. I started to see results instantly and actually felt comfortable exercising.

Unfortunately, a year later I took some time away from TF as I lost a dear friend of mine to cancer. I went back into a slump and my health turned to a record low. Being in quite a dark place at the time and being sick a lot, I turned to medical professionals for answers. I finally found out I had coeliac disease and was placed on a gluten free diet straight away. I had severely damaged my stomach lining and my liver was starting to fail. Being told at the age of 26, with a 2 year old daughter, if I didn’t change my lifestyle, I wouldn’t make it to my 30th birthday was a real eye opener. I knew things had to change, and they had to happen now!

I reached back out to Terri instantly and was welcomed back with opened arms. This time I was coming back with a clear goal in mind. With the help from Terri by doing muscle testing on myself, I learnt some more intolerances I had and dropped 20 kilos in my first month just by eating what my body can handle. Before starting with TF, my diet was consisted of anything easy and quick, which generally was a lot of take away. I learnt how to meal prep properly and how to fuel my body with ‘real food’ via all the knowledge I gained by training at TF. I started kicking some serious goals and was starting to train 4 days a week and reached my biggest goal, losing 50kgs.

In 2017, I fell pregnant and kept training until around 27 weeks. Unfortunately I developed tilted pelvis whilst pregnant and had to stop training. I took some time off to spend with my family and returned back to training in August this year. I had put on quite a bit of ‘baby weight’ and became quite unfit again. But this time I was well equipped and knew exactly what I had to do to get back to the best version of myself.

I cannot recommend Terrific fitness enough to anyone I meet. What I have received from every single coach, is just something you can’t put a price on. Not only have I gained my physical health back, my mindset has completely changed also. TF is like no other business, actually I wouldn’t even call it a business; it’s a community. A community where every single member is valued and every member is supported. To come to a place where exercising doesn’t feel like a chore, but more of a fun activity is exactly what I needed to keep me motivated. There’s one thing that Terri said to me at the start of my journey and it’s something that has really stuck with me. ‘Yes, working out is hard, but so is being unhappy every single day; choose your hard’” – Danielle Toull, Mernda

Of all the companies out there, I chose to train with TF because the trainer was real, she tells you how it is and has her own life experiences to build from. I find it’s more rewarding to learn from someone who has had life experiences and not just someone out of school with a PT degree and no story to relate too. END_OF_DOCUMENT_TOKEN_TO_BE_REPLACED

Thank God I did as it’s one of the best things I did for myself and my family, I’ve never looked back. I have now been training with END_OF_DOCUMENT_TOKEN_TO_BE_REPLACED

Being unable to go back to my beloved sport that I lived for I had to look at different options. I looked online for PT’s close to END_OF_DOCUMENT_TOKEN_TO_BE_REPLACED