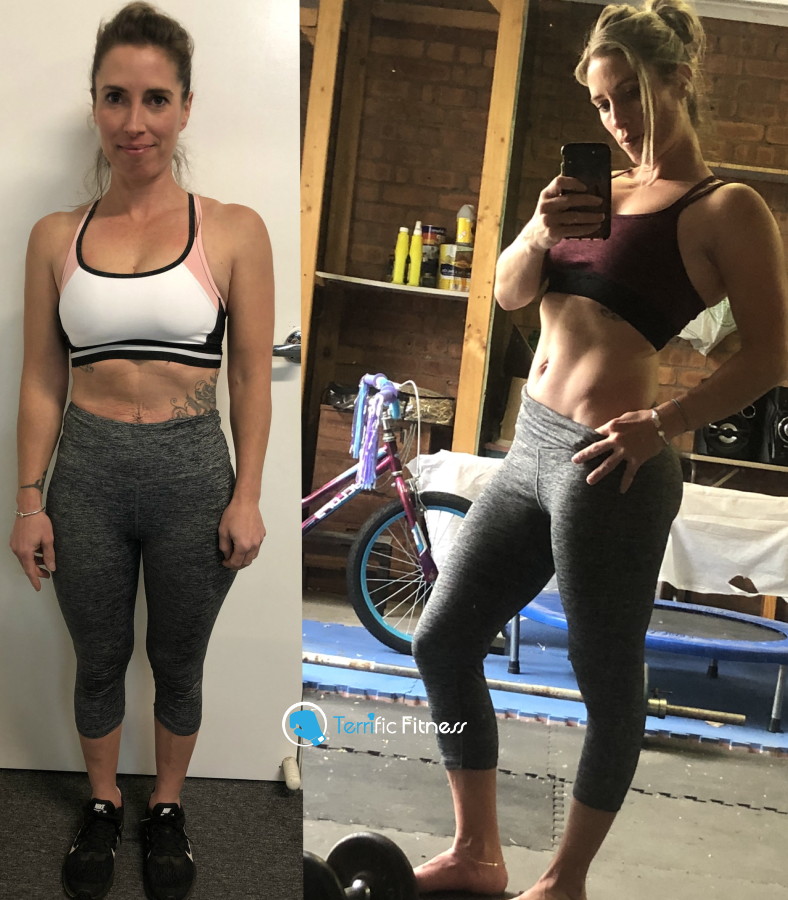 Naomi is a 43 year old single mum working full time and kicking serious ass! Naomi has trained in group fitness with Terrific Fitness for almost 4 years before deciding to take her journey to the next level and take up personal training.

Whilst Naomi was participating in group fitness she was more concerned about just keeping fit and healthy without much regard to nutrition. She was always a tiny person so didn’t think much of it.

In October 2019 she decided to take up personal training with me, Coach Terri, as she was thinking about competing in a fitness show, or at least seeing what she could do her body if she dedicated more time and effort into it. By January she had decided she would just focus on changing her body without the extra pressure of competing. It was a great decision for her.

The results are breathtaking!

In the last 6 months Naomi has:

All of this and still enjoyed an occasional treat.

When Naomi made the decision to start personal training 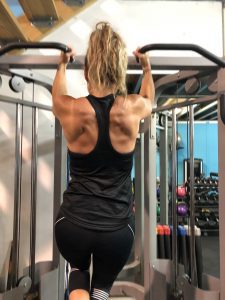 with me (Coach Terri) she decided to cut out coke and chocolate from her diet, which were her staples for getting her through the day. She was lucky to eat 1 or 2 meals in a day. At the time she was participating in group fitness twice a week.

By the time she started personal training with me, in October 2019 she had cut out coke and chocolate. She was still always tired and struggled to get through each day. She had stopped her two sessions of group fitness a week and had set up a home gym in her garage and mixed that up with going to the gym for a bit of strength training. She didn’t really know much about her movement and wasn’t sure if she was doing it right.

When we started PT I performed a posture analysis and structural balance assessment. Naomi had issued with rolling her shoulders forward and her core strength was quite low.

I structured her programs around improving her posture and mobility and building her core strength. All the while teaching her how to perform each movement fluidly. Her techniques improved vastly as did her strength. Within a couple of months Naomi’s shoulders stopped rolling forward, her back strengthened to improved her posture standing taller, stabilizing her core. Her posture and mobility took a complete overhaul.

She went from doing 2 group sessions per week to 5-6 strength sessions and she loved it! When the gym were forced to close in March, we continued PT virtually via video call.

When it came to nutrition we needed to build Naomi up by actually eating meals throughout the day rather than surviving on sugar to get her through the day. She started off around 1000 calories. I started her on 4 meals per day, with tiny portions increasing her intake by 50 calories by the first week. I continued to increase her calories each week by about 50 calories per day, until we eventually got her to over 2000 which she is still currently on. Through this entire process, we managed to drop her weight very slightly, increase muscle mass and lean her body fat. So she is eating double with better results. That’s because we now have her eating real food, not processed stuff.

As a result, Naomi is feeling much less tired by the end of the day and is loving the changes in her body.

I cannot articulate just how proud of this little lady I am! Naomi you are an absolute rock star and I love, love, love working with you!

Naomi’s journey in her words:

“Before PT my challengers were weak shoulders and knee caps, I’ve always had problems with them and I thought that was just the way they are! I was wrong!! Thanks too Terri every week I could feel them getting stronger and I no longer have weakness in either.

My posture was terrible. Now I feel stronger and I actually stand up straight instead of dropping to one side, my shoulders are pulled back instead of rolled over and I feel fantastic. When horse riding I now have full control of the horse due to my stronger core. I used to struggle with the horses, no more.

My biggest lesson has been the nutrition part, I’ve learnt so much from Terri about what foods to eat and how much of what to eat.

My life is so much different with the foods I eat and the amount lol I’ve never eaten this much before. I can’t thank Terri enough for showing me what good nutrition is and how to get the right technique for muscle building.”

Of all the companies out there, I chose to train with TF because the trainer was real, she tells you how it is and has her own life experiences to build from. I find it’s more rewarding to learn from someone who has had life experiences and not just someone out of school with a PT degree and no story to relate too. END_OF_DOCUMENT_TOKEN_TO_BE_REPLACED

Thank God I did as it’s one of the best things I did for myself and my family, I’ve never looked back. I have now been training with END_OF_DOCUMENT_TOKEN_TO_BE_REPLACED

Being unable to go back to my beloved sport that I lived for I had to look at different options. I looked online for PT’s close to END_OF_DOCUMENT_TOKEN_TO_BE_REPLACED