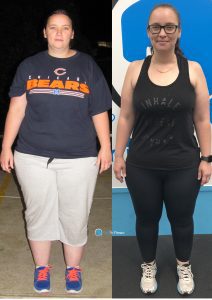 ‘’Danielle, your liver is starting to fail. If you don’t start living a healthier lifestyle, you are at a greater risk of developing cancer.’’   – Those words completely rocked my core. I mean I was only 26 at the time and had I just brought my daughter into this world 12 months prior. How could my body be failing me? How could a relatively young person be in the fight of her life not only physically, but also mentally? This was the last straw.

Two months prior, I lost a very dear friend of mine, who passed away from a very rare type of cervical cancer at the age of 25. I found myself in the dark trying to comprehend how that had happened, and then to hear that I have a high chance of getting cancer because I’m not taking care of myself, well that scared me more than anything ese I had ever been through.

How was I going to fix this?

Like most, I headed straight for the diet and fads. You name it, I tried it! Some worked, some didn’t. Some were easy, some were much harder. Some were costly, some were cheap as chips. I would lose a few kilos quickly in a very short amount of time, and then gain it just as quickly.

This played a crucial part to my mental health issues I was already battling. I felt worthless. A failure. I hated myself inside and out. I couldn’t bare to look at myself in the mirror. Why did I keep failing?

Two months later, at my review, my doctor had told me that I had only made slight changes with my results, and that I needed to seriously consider ‘appetite suppressants’’. Ugh! More tablets? I was already on anxiety medication at the time, so why not add more, right??

But something was telling me not to succumb to suppressants. The fact is, if I was honest with my doctor about how much actual take away and junk I was eating, he might actually get a clearer understanding and suggest something else rather than suppressants.

But I was too embarrassed about how much I actually ate. We’re talking breakfast, lunch and dinner most days. I would sneak food when my husband wasn’t near me, or lie about how much I ate. Ironically I would always make sure that my daughter ate well, yet I could never do the same for myself. Why was I sabotaging myself so much? It’s like I needed someone to grab me by my shoulders and yell, ‘Wake up and be the better version of yourself!’

‘’Hey Danni, want to try a new group fitness class I’m doing? Might be good motivation for us?’’ My friend meant well. The very thought of training in a group scared the crap out of me. My instant thoughts were, ‘What if people stare at me? What if I’m doing things wrong? What if people judged me?’ I had tried a few gyms beforehand and as a result of the 10 times I went in 3 years, it was a very big, ‘yeah, no thanks!’ ‘’Come on Danni, it will be fun! It could be our way of getting out of the house and socialising’’ my friend said. ‘’Fine, just for a few weeks to see how it goes. But don’t pester me if I don’t want to go again’’.

Orientation night came for the new ‘gym’. ‘Holy crap what have I got myself into’ I had thought. I wore my husband’s baggiest top I could find, trackies and a jumper around my waist. You know, to hide my bum.

I was listening to the coach speak; she was telling us that this was the first night of the rest of our new lives. There was nothing to be scared of. From here on out, we would become the best versions of ourselves. GULP! For the first time I had this feeling inside of my chest. I was warm and fuzzy (and no it wasn’t the KFC repeating on me that I ate just before I went there). I was excited. I mean I was still nervous as hell, but I was really excited! I thought ‘I think this has been what I have been waiting for.’ The coach that was talking with Terri Batsakis, founder of Terrific Fitness.

I have overcome massive hurdles, not only physically but also mentally. I have lost 54 kilos on the scales, but I have gained so much more mentally. I was working in a shitty job that I couldn’t stand. I now work for Terrific Fitness, this amazing business that changed my life. I am now making a difference in people’s lives like those coaches did for me over the 7 years I have been training here. Fuelling my body only with nutritious foods, no pills or shakes. I train with the best coaches and members.

My body allowed me to have another beautiful baby.

I’ve captained a women’s cricket team and a women’s football team. If you ever told me this would all happen, 7 years ago, I would have laughed and told you to not be so daft.

The fact is, all it takes is a little bit of courage to take the first step. Has this been an easy ride? Absolutely not. But it has been the most satisfying!

There’s this old saying, ‘what doesn’t challenge you, doesn’t change you.’’

So tell me, what are you going to do today, that betters your tomorrow?

Of all the companies out there, I chose to train with TF because the trainer was real, she tells you how it is and has her own life experiences to build from. I find it’s more rewarding to learn from someone who has had life experiences and not just someone out of school with a PT degree and no story to relate too. END_OF_DOCUMENT_TOKEN_TO_BE_REPLACED

Thank God I did as it’s one of the best things I did for myself and my family, I’ve never looked back. I have now been training with END_OF_DOCUMENT_TOKEN_TO_BE_REPLACED

Being unable to go back to my beloved sport that I lived for I had to look at different options. I looked online for PT’s close to END_OF_DOCUMENT_TOKEN_TO_BE_REPLACED